The estate of Merton in Surrey was in existence from the late Saxon period onwards. It comprised of several farms, a hamlet along the thoroughfare (now Kingston Road) and a village with church further east. A Saxon timer chapel had stood where in 1115 Gilbert the Norman founded the church. He also founded Merton Priory in 1117 further east on the edge of the estate across the river Wandle. The manor originally didn't feature a manor house. Manor Farm was expanded with an annex to house the lord of the manor for his infrequent visits. The farm was remodelled as a proper manor house after 1835 by the then owner, businessman John Innes. He has a park laid out around his stately home with a lodge at the entrance to the grounds.

This period also saw the suburbanisation of the area around London, starting in Middlesex and Southwark, but quickly expanding into Surrey. The railway between Wimbledon and Croydon, opened in 1855, had a station at Lower Merton from 1968 onwards. It is now the tram halt Merton Park. Pre-empting the opening of the station John Innes bought extra land at Lower Merton with the aim of developing it for housing. The concept for a suburb in the area on both sides of the new railway involved attractive, picturesque, artistic and varied buildings set among grass, trees and shrubs. This makes John Innes' "Merton Park Estate" the first garden suburb in London. The “garden suburb” was conceived as a socially mixed development, with small cottages (either terraced or semi detached) mixed with villas in various parts of the estate.

Three new straight roads were laid out by Innes (Dorset Road, Mostyn Road and Sheridan
Road) in 1870 and 1871, in anticipation of suburban development. Part of Sheridan Road followed the line of an older footpath, part of which survives today crossing the railway line/tramline. After this Melrose Road and the eastern part of Langley Road were constructed, as well as Kingswood Road north of Kingston Road. Mayfield road was laid out in 1877. Most of these new roads included avenues of trees (Planes and Chestnuts). Holly hedges were used to define each plot. Development however was slow to start. The first phase of development (1870-76), consisted of large Victorian villas and small cottages, of fairly conventional design. The architect of the first buildings is thought to be RB Marsh, who worked for Innes between 1870 and 1873. He was followed by Henry Goodall Quartermain, who worked for him from 1873 until his death in 1904. 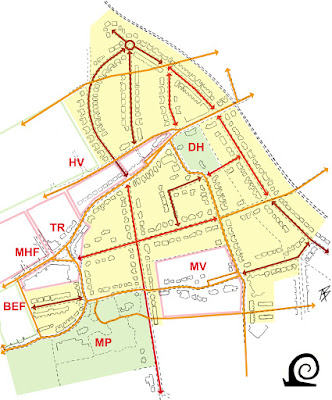 The housing estate of Merton Park (shown in yellow) integrated older footpaths and country lanes (shown in orange). Merton Village (MV), the hamlet of The Rush (TR) and Dorset Hall (DH) were avoided. The first streets to be built are in the east (shown in red) the later streets are shown in dark red and connect to pre-existing lanes and streets from phase 1. In phase 2 some older lanes are cut off (for instance on the north side). The Manor Park lies at the side of the development. Other landholdings were developed separately: Merton Hill Farm (MHF), Bakersend Farm (BEF) and Henfield Villa (HV).

By the end of the 1890s, development along the south side of Kingston Road is almost
complete. Between 1900 and 1914 most of the new development took place at western end of the suburb in Watery Lane and Manor Gardens. In 1910 a new school was built at the end of Church Lane. Empty plots along this street and the first residential roads were also filled in. During the 1920s this process continues until the whole section south of Kingston Road is developed for housing. North of Kingston Road most of Mayfield and Kingswood Roads had been completely developed by 1890. In 1897 development on a larger scale starts with a more planned set up, starting with a curved street (Winton Crescent) and a straight street (Wilton Grove) that connects to an older path that ran in front of Henfield Villa. The grounds of Henfield Villa were developed in the 1920s as a series of parallel streets as was customary in Victorian times. 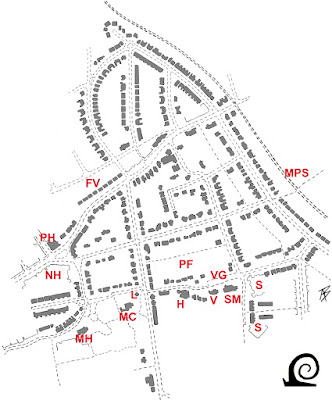 Merton Park Estate has a irregular layout compared to the typical Victorian housing development. The housing is varied and ranges from freestanding villas to semidetached houses and long terraces. This mix creates an attractive almost village-like feel in this development. This was always the aim as the development is romantic and anti-urban in character. The eastern boundary is the train track with Merton Park Station (MPS). The estate is monofunctional with only housing and special functions around the edges. The earlier Fairlawn Villas (FV), the public house (PH) and the former Nelson Hospital (NH) are at the western edge. In the south the village of Merton with the Church of Saint Mary (SM) with graveyard, a village green (VG), vicarage (V), community hall (H), playing fields (PF) and two schools (S) and the adjoining St Mary's Cottages form a separate entity. The same is true of the former manor park with the Manor House (MH), Merton Cottage (MC) and the Lodge (L) at what was once the entrance drive.

The manor park was first developed by adding a school and sports pitches. The manor house itself was converted into a school in 1945. The former manor park is now the John Innes Park. The southern section was the site of the John Innes Institute from 1910 until it was moved to Hertfordshire in 1945 and the site was redeveloped for a large school (Rutlish School for Boys). There has been more redevelopment in other places. Some are in keeping with their surroundings other clash notably. Although six different architects were employed to design the buildings at Merton Park - RB Marsh, HG Quartermain, JS Brocklesby, T Newell, LS Sullivan and V Farrier- the estate has a recognisable aesthetic and spacious setup that differentiates it from its suburban surroundings. The whole estate is a conservation area.