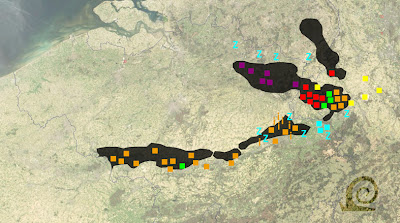 Le Sillon Industriel stretches from the border with France across Wallonia to the border with the Netherlands. The oldest mines (in green) were already in use in the Middle Ages. Because the coal seams lay shallow mining for coal meant little more than digging holes in the ground or digging on the sides of deep river gorges (for instance around the Wurm). In the actual Industrial Valley mining took off after 1810 (shown here in orange). Especially around Liège ironworks were built (shown on the map as "i" ). Around the same time (from about 1820) the small scale mining north of Aachen (Aix-la-Chapelle) was scaled up (also shown in orange). In between these two zinc mines (shown in blue) are located. Around these mines and near Liège zinc factories (indicated with "z") were first built. From around 1900 zinc production expanded northwards to the sparingly populated Campine region. From 1880 onwards but mostly after 1900 mining was expanded west of the ancient and medieval mining sites around Rolduc (Hertogenrade/Herzogenrath). Here many mines were founded in a rather isolated rural area (mines shown in red) around Heerlen, Kerkrade, Schaesberg, Nieuwenhagen, Brunssum, Hoensbroek and Geleen. After 1900 this development moved even further west into Belgium where several large mines (shown in violet) were established. North of these coalfields lignite was mined from about 1900 in open-pit mines (shown in yellow). This is the only form of mining still in practice in this area today!